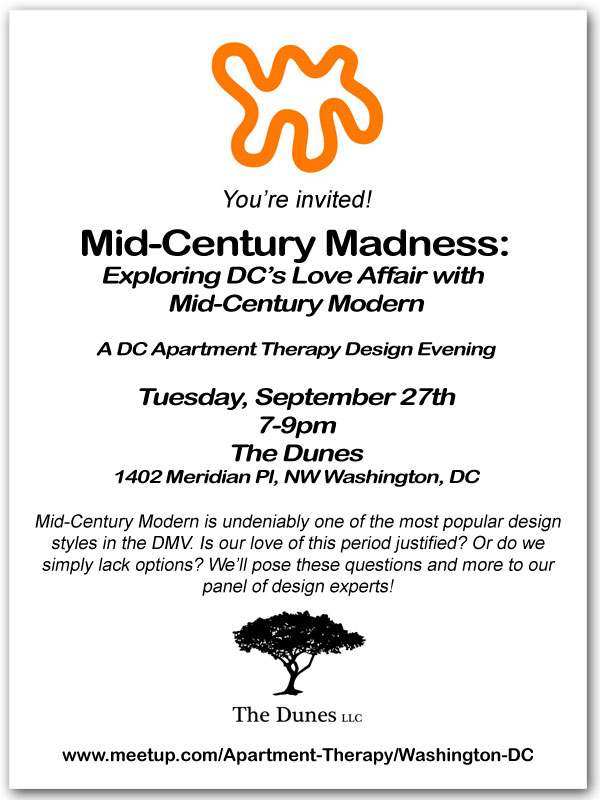 Suzanne McLees - A native Washingtonian and resident of the award-winning mid-century modern community in Alexandria, Virginia, Hollin Hills, Suzanne McLees is a passionate enthusiast for modern art and design. Formerly Northeast Area Manager of Design Within Reach (DWR), Suzanne opened DWR's first location in Washington, DC, in Cady's, Alley/Georgetown in 2004 and managed the Adams Morgan studio (now closed) from 2005-2007. She has lived in France and traveled to 26 countries. Although her current profession involves international health and development with travel to Africa, in her spare time, she actively pursues her interest in all things modern. Suzanne is Chair of the committee planning the April 28, 2012 Hollin Hills House and Garden Tour (for details, visit www.hollinhills.net and, on Facebook, Hollin Hills House and Garden Tour).

Robert Chapman - Robert Chapman is one of DC’s leading purveyors of mid-century modern furniture. Many of you know him from his years running Modernicus. He is now preparing to open his new store at Cady's Alley in Georgetown, ARCHER which aims to be an inspiring retail experience that highlights 20th Century design and fine art alongside a permanent collection of high quality modern furnishings for the home. A regular exhibition schedule of important designers from around the world ensures the continued dialog of good design.

Submit Your Events to
The Interior Design Social Diary™
on Facebook!