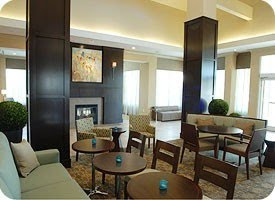 The new Hilton Garden Inn Charlotte/Concord in North Carolina is the brand's 500th hotel, but it's the design of the property takes the brand into the future.
The 118-room hotel is the first property to feature the brand's new design prototype, Gen 7, which emphasizes contemporary design and an open feel. Owners Joel Griffin and Doug Stafford of Griffin Stafford Lodging One, LLC, learned of the new prototype soon after they began developing the hotel in 2008. They quickly decided to move forward with the new prototype and hired Mary and Buddy Layman of Layman Hospitality Group for the interior design and installation at the hotel. The Laymans have worked on nine Hilton Garden Inns in the region over the past 12 years, so they were familiar with the brand's concept as well as the shifts in style over the years.
"The owners wanted something modern," Mary Layman said. "We had a lot of fun with this, because from knowing the owners we know their tastes and incorporated them."
Working closely with Hilton, the Laymans devised a color scheme of aquamarine blue and shades of brown, with dark walnut furniture, and worked on a layout that would encourage guests to spend more time in the public spaces.
The hotel's centerpiece is the open-concept pavilion, the welcoming first-floor space that contains the registration desk, restaurant, bar, mini-market and seating areas where guests can gather. The spaces flow into each other with subtle space dividers, such as a row of waist-high boxwood hedges that separate the front entry from the living room-like seating area.
"It's more residential," Mary Layman said of the concept. "A hotel that invites you to spend time in it is more residential. We hope people feel comfortable enough to come down here with a laptop, get a drink and relax."
One seating area, which Director of Sales Steven Boudreau calls the "cozy corner," features a grouping of four overstuffed chairs around an ottoman. On one arm of each chair, there is an attached tray -- perfect for a laptop or cup of coffee. He described the overall pavilion layout as an "open coffeehouse feel."
Hotel owners typically invest a lot in making the lobby look great, but there's often a frustration when guests choose to spend time in their rooms instead.
"The seating areas encourage people to spend more time in the lobby," Mary Layman said, which means guests are more likely to spend money at the F&B outlets, or on a snack from the market pantry.
Another feature of the redesign is a more prominent bar. The bar sits across from the restaurant's tables and has lounge-like seating next to it and in a nook behind it. Buddy Layman said the placement once again encourages guests to linger in the space
The Laymans called upon a mix of local and national suppliers to achieve the vision. One of the standout design features, which brightly echos the brand name, is the preserved greenery in the public area. Botanica, a local company, provided boxwood bushes in the pavilion as well as two mirrors, one in the pre-function space and the other in the lobby. The mirrors are surrounded by preserved moss shaped into an eye-catching oval design. Mary Layman spotted the mirror tin the Botanica showroom and asked the company to reproduce it for the hotel.
Her discerning eye also spotted the pattern for the carpet used in the boardroom, the ballroom and the lobby and restaurant area. She saw the pattern on a paper at the Durkan factory. The company had purchased it but didn't yet have it in their line, but she knew she had found her carpet. Merit Carpet supplied the carpet for the guest rooms.
Pacific Coast Lighting supplied the lighting in all public areas.
The wall art was supplied locally from Picture House Gallery. The Laymans chose posters that were blown up and then coated with a substance to make them look like handmade art, not posters. Many of the pieces were left unframed.
"It gives it interest rather than the typical framed art you see in other hotels," Mary Layman said. "It gives it the feel of an art gallery."
Courtesy of Beth Kormanik/Hotel Interactive
http://www.hotelinteractive.com/ 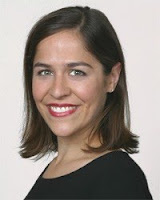 Beth Kormanik is managing editor of Buyer Interactive and editor of Hotel Interactive. She previously covered politics, government and higher education for the Florida Times-Union in Jacksonville, Fla. While at the Times-Union she won several state and regional awards, including the 2008 Freedom of Information award from the Florida Society of News Editors and the top honor in the 2007 Florida Bar media awards for large newspapers. Beth also was a reporter and editor for the Milwaukee Journal Sentinel and the Cincinnati Enquirer. Beth is a native of Columbus, Ohio, and a graduate of the Medill School of Journalism at Northwestern University.
Posted by IDRA The Interior Design Resource Agency