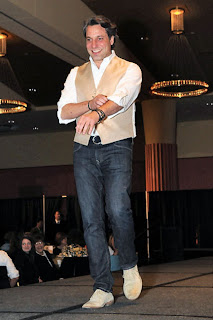 Familiar Furniture: CNY native Thom Filicia designs pieces named after local landmarks
Celebrity designer Thom Filicia's house may scream Skaneateles lakefront, but his table says Eastwood and his bed is all Mattydale.
Filicia, the former "Queer Eye for the Straight Guy" interior designer who now hosts "Dress my Nest" on the Style Network, recently launched a 69-piece furniture collection. Every piece in the collection is named after a Central New York spot, said Filicia, a Syracuse University graduate who was born and raised in Syracuse and bought a vacation house in Skaneateles last year.
"I have cousins who live on Robineau Road," he said, explaining why he named two mirrors in his collection after the Syracuse street. "The Slocum Hall side table looks like it was designed by architects and Slocum Hall is where the (SU) School of Architecture is. The Solvay table is made out of metal and Solvay has the metal (Crucible) plant."
When determining the names of his pieces, he said, "I would look at the piece and see what came to mind."
Some of the namesakes are inside jokes with his friends, he said. Some pieces, perhaps, reminded him of a friend's grandmother's house, he said.
Filicia said he started designing the collection about two years ago. For years, he said, he's designed custom furniture for his clients and many of the pieces are mass-production-adapted versions of pieces he's built over the years. The furniture is produced by Vanguard, a company in North Carolina.
Filicia debuted his collection about six months ago and a few stores in Los Angeles and Florida just began carrying the line. Otherwise, the furniture is not yet available to the public.
He's in negotiations with Stickley, Audi & Co. and others, he said.
"It's definitely coming to Syracuse," he said. "We're just waiting to see who wants to carry us."
One spot where the furniture will be, Filicia said, is his Skaneateles Lake house. Filicia bought the house last year and has been slowly renovating it since. The renovation is about three months from completion, he said.
The pieces cost between $600 and several thousand dollars, he said. Individual piece prices are available by calling Vanguard. Central New Yorkers who want to buy pieces can order them online at www.vanguardfurniture.com/collections.
What parts of CNY would you name your furniture after?
Thom Filicia named a chest after the Wellington House in Fayetteville and chair after the Century Club in Syracuse. If you were a furniture designer creating pieces named after CNY spots, what would you make? E-mail your ideas to home@syracuse.com. The most creative (or funniest) entry will receive a free copy of Filicia's book, "Style." Please write "Filicia" in the e-mail's subject line.
Credit: Pam Lundborg/Syracuse.com
Photography Credit: The Post Standard
Posted by IDRA The Interior Design Resource Agency